Last weekend, I let Ryan pick our activity for Saturday because we had some cooler weather and I knew he had been craving a hike outside of Atlanta. I had no clue what I was in for when he took me to Amicalola falls, which is a 729 foot waterfall- the highest in Georgia. I was expecting a walk in the woods, but he managed to find an amazing waterfall (with minimal hiking required!).

It’s about a twenty walk from the parking lot to the falls (you have to pay five dollars to park as it is a State Park, and right now it’s cash only, FYI). It’s more of a walk than a hike- it was basically a few steps and then a ton of steps with different vantage points to get to the base of the waterfall. You can take more steps to get to the top of the falls, but I get a little freaked out over heights, so we stayed at the base.

The views from the base were amazing- I don’t think my pictures do the waterfall any justice. We stood there for almost a half hour just looking up and feeling the spray- I’ve never seen a waterfall that high in the United States, let alone that close.

We only stayed at the park for two hours- if we were to go again, I would pack a picnic to sit at by the small streams at the bottom. There are a lot of things to do around the park (like real hikes, haha), but we arrived pretty late in the afternoon and just came to see the waterfall. If you’re like us and just want to see the view, I would combine the visit with a fall trip to an orchard in Ellijay or an afternoon in Dahlonega to make it a full day.

Being outside and watching the waterfall was so relaxing- I didn’t wish we had done anything else at the park. Our day was more of a fun drive and a way to escape the city than a “let’s have an adventure and go on a ten mile hike” kind of day. We’ve been keeping busy these past weekends, so it was nice to just drive through some back roads and stop for a few hours. But, you could do more- the park has plenty to do, such as fishing in the reflecting pool at the base.

Our day felt a bit unlike a usual date for us (this could be because Ryan planned it, in hindsight)- we spent almost as much time in the car as we did going to a waterfall, haha! I was pretty apprehensive at first about driving an hour and a half to go to a waterfall- but what else were we going to do, haha?!

Honestly, just going on a long drive and getting outside was probably just what I needed- it forced me to really relax. I realized after we visited the park that being forced to be creative for outside activities had led us to things like this- we probably would’ve been on the Beltline had we not been social distancing. It was definitely a “find the positive” kind of moment- I’m glad we can explore other parts of Georgia and nature right now, and do something we never would’ve otherwise!

One thought on “Amicalola Falls” 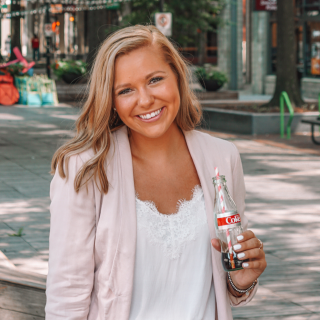